Solidarity with All Refugees – Against the Racist Reality!

Every day there is new news about fire-bombings of refugee shelters – the wave of racist attacks peaked in the last few days. The first half of this year saw the same amount of racist assaults as in the whole of 2014.

At one of the shelters in Heidenau, a rabble of Nazis and so-called „concerned citizens“ went on the rampage for 2 days, hardly interrupted by the authorities.

Refugees are afraid to walk the streets. Because of the ongoing danger, they can only take care of their barest necessities. This isn’t a purely east german phenomena, racist attacks also commonly happen in Bavaria, Northrhine-Westfalia, Baden-Württemberg or Lower Saxony. Meanwhile in the Osnabruck area, in Bramsche-Hesepe, a dangerous undercurrent starts to develop in the people’s minds. While racist atrocities or mass gatherings haven’t happened here yet, the momentary situation gives cause for alarm.

It has to be said about the public posturing of the media and the policy-makers, that over the years their atonement of racist attitudes and their sympathy for so-called fears and daily rabble-raising watered the ground for racists und patriots. Those who use terms like „economic refugees“, “refugee flood“ or the fabled „immigration for social welfare“ have consciously worked to produce a racist atmosphere.

However, no racist mob is necessary for the mass killings of refugees. Simply dividing refugees into the economically „needed“ and „un-needed“ brings on the death of many thousands. Toughening asylum laws makes it possible to fling just about every refugee into jail. The policy-makers are working on even more restrictions of refugees’ rights.

Crowding refugees in mass accomodations, like in Bramsche-Hesepe, is also inhuman. This mix of state-run racism and rabble-raising citizens must be stopped!

Come to the demonstration, on Friday 4th September, 17:30h, at the DGB-House (August-Bebel-Platz 1, next to maintrainstation Osnabrück)

Be solidly united with all Refugees! Against the racist Normality!

Organized by the „Network against Racism Osnabruck“:

Termine / regular dates:
No Lager-meeting, every thursday at 7pm at SubstAnZ (Frankenstr. 25a, 49082 Osnabrück)

Alarmphone:
At the moment deportations can not be prevented by calling our alarmphone! In many cases deportations are lasting a few minutes only. In this short period of time we are not able to reach you. Therefore, the alarmphone is currently out of order. What to do in case of a deportation you can find here .

Flyer: Who is No Lager Osnabrück? 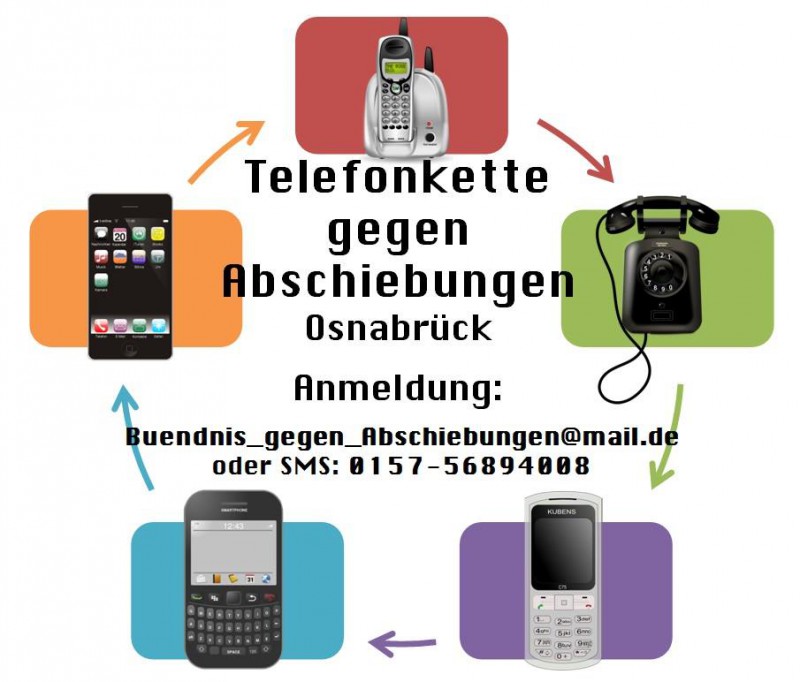